When you get close to the kitchen classroom at Owen Springs Education Centre, don’t be surprised if your mouth starts to water. The fragrance of fresh-baked bread, sweet cakes, and earthy spices hits you as soon as you get near.

The scent means that Aunty Pat Skinner and her class of young students, mostly young men between the ages of 14 and 18, have been hard at work, cooking up a storm.

Pat’s been an Aboriginal Education Officer, or AEO, here at Owen Springs for nine years. Owen Springs is the education unit in the Alice Springs Youth Detention Centre, where detainees can continue with their education and learn some valuable life skills while they wait for court dates or to see out the duration of their custody. Some kids come in for a night. Others are here for a while. 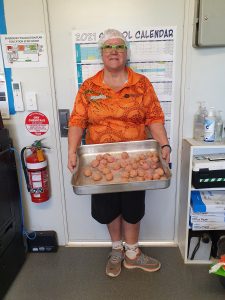 “I’ve had one young fella come in when he was 12,” Aunty Pat explains. “He’s had every birthday bar one with me. He’s had four or five of them in here.”

Pat’s been running a baking program in the centre for the past few years, as a way to reconnect the kids to native foods (all the kids in the program are Indigenous). Pat incorporates native Australian ingredients in all her cooking classes, from sweet potato and Kakadu plum muffins – “The kids loved them until they found out they had vegetables in them!” – to sausage rolls with cinnamon myrtle and wattleseed, and banana bread with dried strawberry gum.

“These kids can make sausage rolls with their eyes shut,” she laughs.

But her main vision for the program is to help them reconnect with their families and their culture.

“Some of these kids are parents already, so to be able to look after their families, know how to cook, how to do the dishes, those basic life skills, are really important,” Pat says.

The cooking program was defunded for a while, but has recently restarted, with renovations in the works to get the kitchen out of a donga and into a purpose-built facility, with multiple cooking stations. Since they’ve started cooking again, Pat has noticed a boost in self-confidence among the kids, also noting their resilience.

She shares a story about one of her past students, who found work on a cattle station when he was released.

“When he was in here, he did the cooking every day, just about,” she starts. “And when he got out and went to work, he threw the cook out of the kitchen and started cooking meals on the station. Everyone wanted to know where he’d learnt to cook like that, and he said ‘My grandmother taught me when I was in detention’.

“I ran into his mother in the street one day, and she said ‘Aunty Pat, thank you for teaching my son to cook. We’ve never had such tasty meals’.”

Aunty Pat has been working with The Australian Superfood Co’s community partner Red Dust Role Models since 2013, when Red Dust started their music and cultural leadership programs with young men in incarceration. More recently, the team at Red Dust has been supporting Aunty Pat’s cooking program, and helping her realise her vision of sharing her knowledge around traditional foods with the next generation.

When they’re not in the kitchen, the kids are in the classrooms, having lessons in maths, English, history and art. “We also have a mob from Drug and Alcohol Services Australia, come in, and a legal person to let them know what their rights are” Pat says. 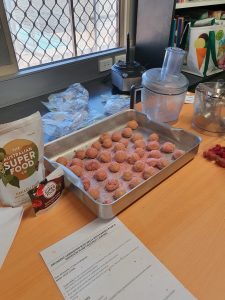 Aunty Pat also works with the kids on fostering good relationships with the Youth Justice Officers. “It shows the young ones that we’ve all got to work together, and it encourages them to make better choices in their young lives,” she says, adding that the Youth Justice Officers often join in on yarning circles. Yarning circles are an important part of Indigenous culture, used to pass on knowledge and build relationships.

While Pat’s official title here at Owen Spring is AEO, her close connections with the kids, maternal instinct and watchful eye mean many of the kids here give her a different name: Nana.

“That’s what they call me,” she says. “And a lot of them are my grandchildren. They’re all good kids. They’ve just made some bad choices.”