While Dom Smith may describe himself as a ‘jack of all trades’, he seems more of a master to me. He’s a farmer, with a knack for aquaponics. He’s studying nursing. He works in aged care. Before he started farming, he was whipping up pancakes (among other things) for 1500 Australian Defence Force personnel in Darwin.

These days, most of Dom’s time is spent on his farm, Pundi Produce, in a small town called Monash in South Australia’s Riverland. Monash is a quiet town; only about 500 or so people live here. But like most places in the Riverland, the area has a strong sense of community.

The landscape here is pretty arid – red soil, eucalyptus groves, a few vineyards – but after years of studying, learning and a fair bit of trial and error, Dom knows what grows well here. He’s part of a rising movement of Indigenous growers propagating native Australian ingredients. 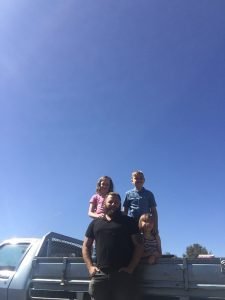 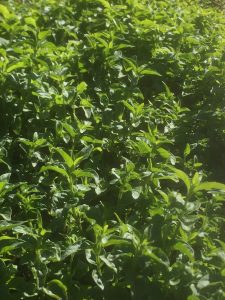 “I started Pundi Produce about six years ago, but I only really got into natives in the last two or three years,” he says. “I’ve got about ten acres of wattle trees, river mint, muntries, lemon myrtle, aniseed myrtle, quandongs. I’ll have some finger limes going in soon too.”

The plant that Dom’s most passionate about is the wattle. There’s a growing market for it – what with its nutritional benefits like high protein, potassium, iron and zinc – which Dom hopes to meet through his burgeoning crops. “I want to go pretty big with wattle,” he says. “Apart from the nutritional benefits you get from it, the biggest thing is no chemicals, pesticides or fertilisers are needed for the trees.”

While Dom picked up most of his farming skills from going to Urrbrae, an agricultural high school in Adelaide, where he learned about agriculture, waste water management, and commercial farming, his love of the land – and what he could grow – came from his Nanna.

“I used to watch her in the garden, and she was good with plants. She grew tropical plants, succulents, she even had a coconut tree. As a kid, she taught me a lot about plants.” 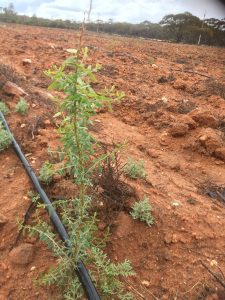 Dom is part of a growing list of Indigenous farmers re-entering the native food scene, and has just signed on with Hayley and the team at The Australian Superfood Co to provide them with farm-grown ingredients.

“We met Dom through Daniel Newchurch, from Newchurch Horticulture,” Hayley explains. “They’ve been working together for some time, with Dom offering guidance and assistance to Dan where he can. They’re both so committed to the other’s success; Dom sees what sort of produce Dan’s growing, and he’ll focus on cultivating something else.”

To start with, Dom will be providing river mint to The Australian Superfood Co, with wattleseed to follow when the trees are ready. River mint and wattleseed are two of Dom’s favourite native ingredients.

“I use wattle seed to make coffee, ice cream, and damper. The river mint, I grind it up into a powder, make tea with it. I really want to see what it’s like in a dessert. My son gets right into cooking cakes, so we’ve been trying to add some natives ingredients into that too.”

You’d think farming – and his family – would be enough to keep Dom busy, but he’s also working on setting up an initiative to help out men who are struggling with their mental health. “I’m very passionate about mental health, not just for Indigenous men, but for all cultures,” he explains. “But I want to start with Indigenous men, to take them back to Country, and then to learn more about the foods that our people have been eating for thousands of years.”

Hayley and the team are excited to be working with Dom, and other Indigenous farmers, to source a range of native ingredients.