A couple of hours outside of Adelaide, in a little town called Port Victoria on the York Peninsula, something exciting’s happening in the native Australian food movement.

Proud Narungga man Daniel Newchurch has just taken over his grandfather’s farm, but has flipped the planting model. Rather than continuing to grow spring onions and parsley, crops his grandfather has been successfully cultivating for the past 20 years, Daniel’s pulling it all out, and focussing his sights on growing native Australian foods instead. 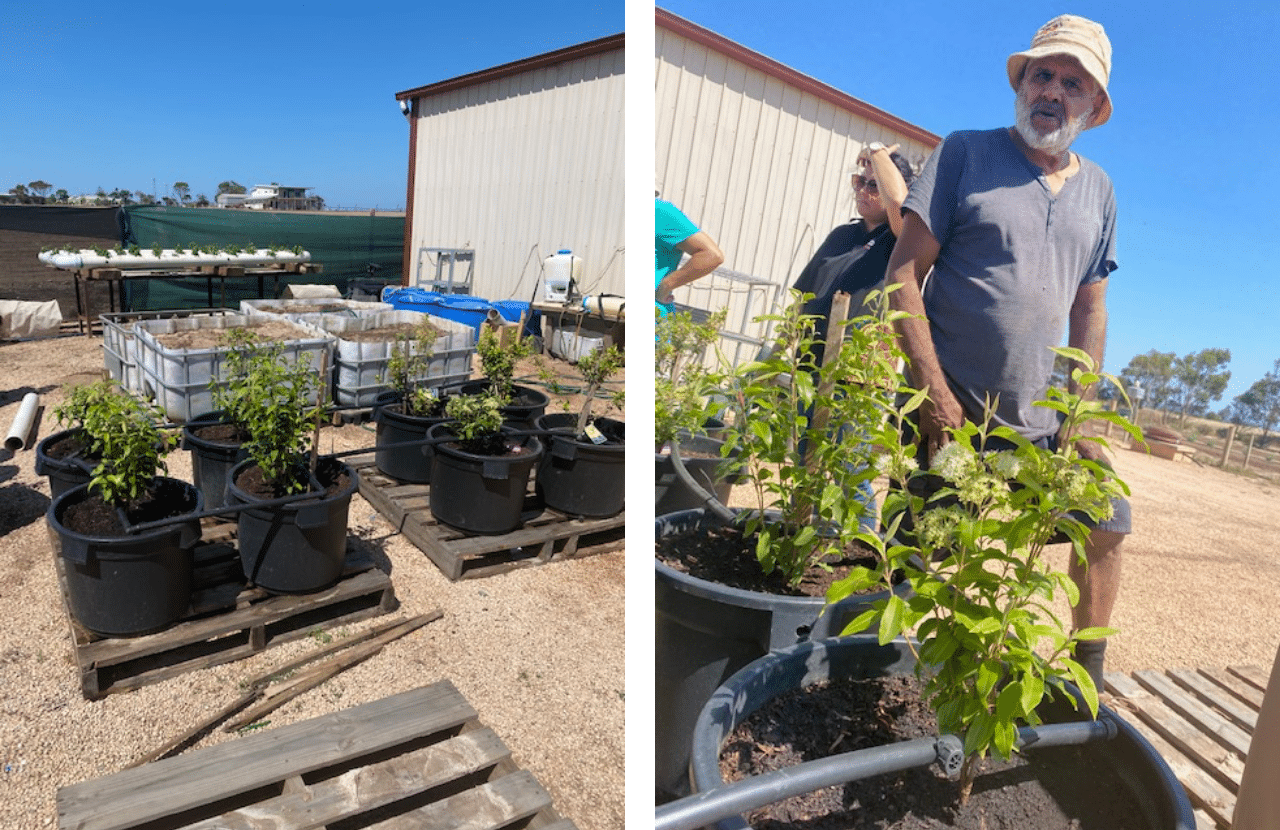 “When my grandfather started the farm, he was growing native foods,” Dan says, walking between rows of seedlings on the 80-acre property, his dog Clyde at his heels. “There just wasn’t a market for these ingredients back then. The native food scene wasn’t even niche; it was considered a novelty market.”

Dan’s grandfather, Ron, ripped everything out and started again, planting spring onions and conventional herbs instead. That’s how he’s been making his bread and butter ever since.

“My grandpa is totally self taught; he relied on his intuition, and he had the courage to try new things. If he had a setback, he’d go back to the drawing board, think about it, and somehow always come back on top. He’s pushing his 70s now; I think it’s important to acknowledge how resilient he is. Australia perceived Indigenous people very differently back then.”

Last year, ready to retire, Ron asked Dan if he’d be interested in taking over the farm. 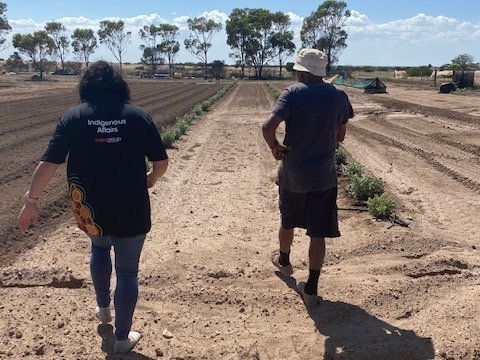 “I was really hesitant at first, and wasn’t sure if I wanted to get into commercial farming,” Dan recalls. “My background is in the trucking industry, so it was a huge career change for me. But after talking to some suppliers, and then meeting Hayley from The Australian Superfood Co, I was really keen to get on board. I realised that the native food market was really starting to open up, and that now there was finally demand.”

Hayley met Dan and Ron through Topaz McAuliffe Indigenous Engagement Specialist, who had heard about Dan’s plans to return the farm to its original roots, and wanted to make sure they had a guaranteed customer for their produce. That’s the beautiful thing about community; everyone looks out for each other, and lends a hand when they can.

The switch to native Australian fruits and herbs makes sense. “Native ingredients are natural plants. They grow here naturally!” Dan laughs. “They require less water, less fertiliser, and you don’t need to worry about pesticides. For us, this switch is more beneficial in the long run.” 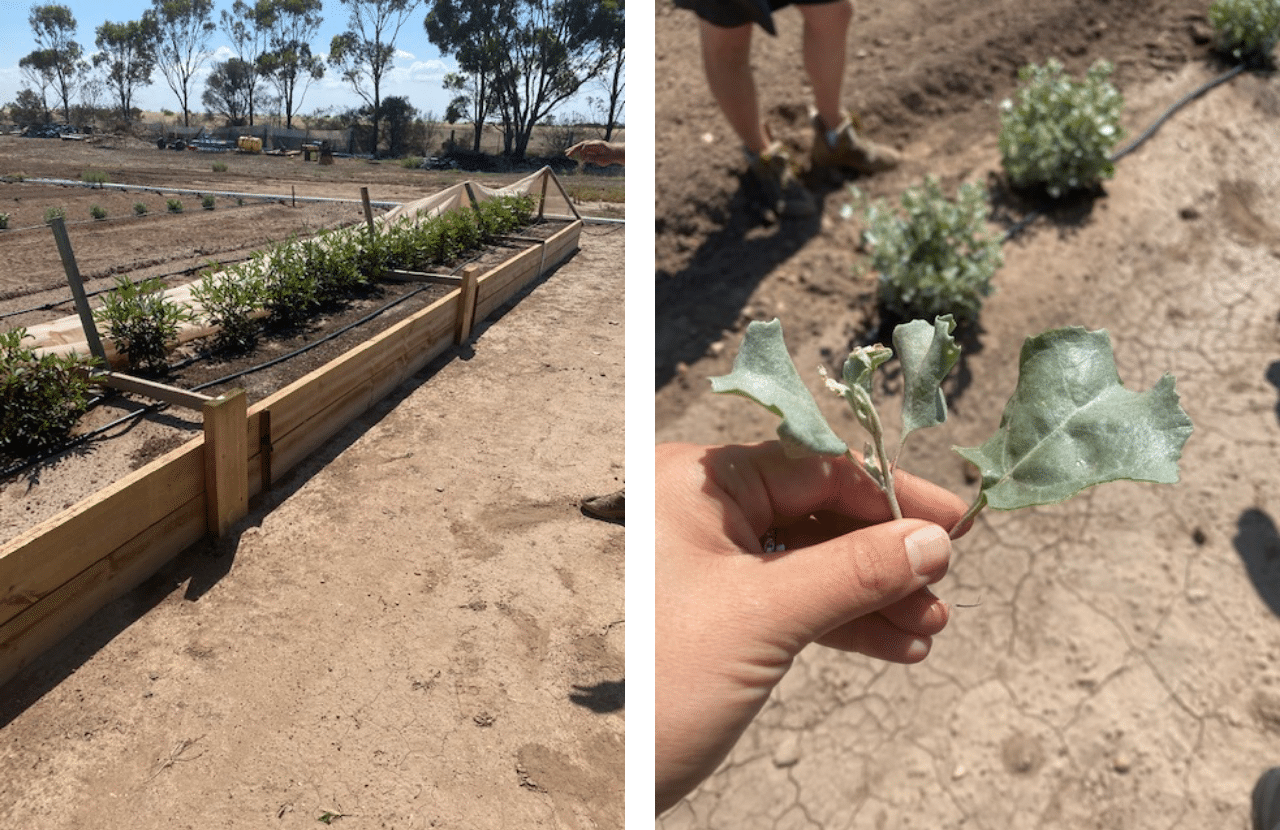 While Ron has stepped back from the day-to-day running of the farm, he’s remained a mentor and sounding board for Dan.

“We asked him what he grew when he was starting out, and what he had success with. His original blueprint were plants that were all suited to the area, so that’s what we’ve gone with: saltbush, quandongs, native parsley, celery and thyme. We’ve got about 15 different species in the ground at the moment.”

At this stage, Dan’s providing The Australian Superfood Co with Old Man Saltbush and River Mint. As the farm is still in its early stages, Hayley and Dan are working together collaboratively to ensure the supply meets the demand.

Hayley’s thrilled to be partnering with Dan. “I love his passion and knowledge of Australian natives, and the way in which he and his grandfather Ron are operating. I’m so excited to be working together.”

Dan’s got his eyes on the future. “When I tell people about the farm, they’ve started asking ‘Do you grow this. Do you grow this?’, and I’m like ‘Wow, people know about it!!’. This cultural shift is only getting bigger, and the more I do it – talk about it, learn from my grandpa, get my hands in the dirt – the more excited I get. I’ve got people like my grandfather and Hayley backing my decisions. Plus I’m doing what I love.”

The opportunity to champion native Australian ingredients is high on Dan’s agenda as well. “Australia should be known for its own cuisine and ingredients, not a shrimp on the barbie or a meat pie. The national cuisine for Australia should be the lemon myrtle, the saltbush, the Kakadu plum – that’s what Australian food is. It’s been sustaining my family for 50,000 years.”